Kelley Institute of Ethics and the Legal Profession

The Frank J. Kelley Institute of Ethics & the Legal Profession at MSU Law addresses issues of ethics and the legal profession through teaching, research, and outreach programs. Named for Frank J. Kelley, the longest-serving attorney general in U.S. history, the Kelley Institute builds upon the dedication, professionalism, and ethical code that marked his career, including his 37 years of service to the State of Michigan. 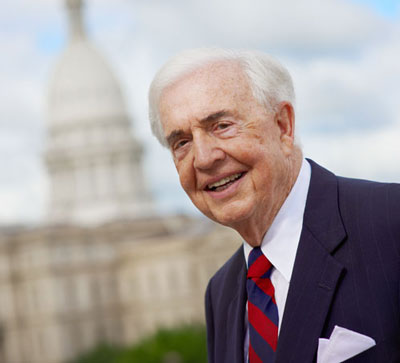 Frank J. Kelley was the Michigan Attorney General from 1961–1999, making him the longest serving attorney general in the history of the United States. During his 37 years of service, General Kelley was not only a champion for Michigan families, but defined the office of attorney general across the nation in ways still felt today.

He was an innovator. General Kelley was the first officeholder to establish Environmental, Consumer Protection, and Criminal Fraud Divisions – all staples in most any attorney general office today. Working with allies in the legislative and executive branches, he championed model laws that successfully passed, such as the state’s consumer protection act, freedom of information act, and open meetings law. Near the end of his career, General Kelley was a leader in the Tobacco Master Settlement Agreement, which more than any other case in recent decades has defined the power of this office and elevated state attorneys general as a potent force in America’s federalist system.

Through these achievements and others, General Kelley transformed the office of attorney general. Prior to World War II, this unremarkable seat functioned as the behind-the-scenes lawyer for the governor and the various state agencies. In part through General Kelley’s legacy, the office added a new role: the attorney general was now the “People’s Lawyer.”

For more on Kelley’s life and legacy, see The People’s Lawyer: The Life and Times of Frank J. Kelley, the Nation’s Longest-Serving Attorney General, by Frank J. Kelley with Jack Lessenberry (2015).

Kelley Institute of Ethics and the Legal Profession